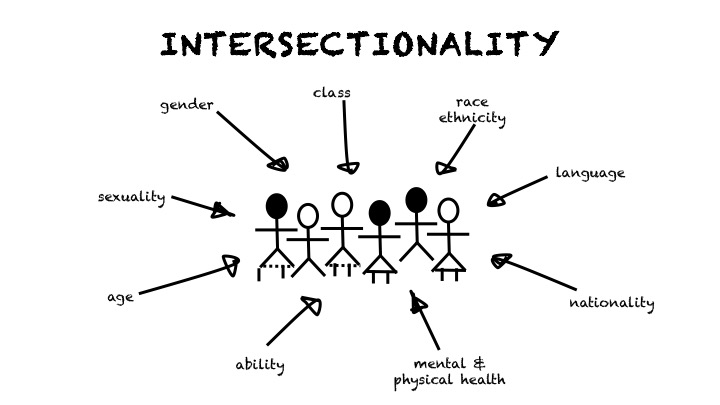 Have you ever stopped and wondered, “am I a bad feminist?” I know I have, and I know that I am not alone. Roxane Gay, an American writer, talked about how she was constantly a bad feminist in her book titled the same. She talked about how even though she supported women’s rights, she would still find herself dancing along to the catchy beats of a misogynistic song. But I am here to tell you that none of those things make you a ‘bad’ feminist, however, not being intersectional in your approach will. I have talked about feminism so much that I am now minoring in gender studies, and recently I realised that I still have not talked about intersectionality. In order to truly be a feminist, it is important to know the I’s of feminism and not just the ABCs.

If you’re not aware of what intersectionality means, do not fret! Here’s your word of the day; ‘intersectionality’ first emerged as a concept in legal studies introduced by Kimberle Crenshaw. It is an analytical framework to understand how different aspects of someone’s identity come together and create different types of obstacles. It sounds like a very complicated concept but it really is not, it is actually quite intuitive.

Look at it this way, a white woman and a black woman are both victims of patriarchy, however, the black woman also has the added obstacle of systemic racism. Her identity, in this way, comes together to create obstacles that are unique to her. Basically, intersectionality looks at different systems of oppression such as colonialism, homophobia, misogyny, disability, etc. and how they compound one another.

‘White’ feminism or feminism that only looks at gender when talking about any social inequity completely disregards other forms of oppression that might affect an individual’s life. For example, 1 in 5 women in college reported being sexually assaulted and while that statistic is terrifying and should be thought about, it is also important to know that women who identify as being bisexual are more likely to be sexually assaulted than women who don’t.

Intersectional feminism takes into account racism, classism, casteism, transphobia, homophobia, etc. It looks at all parts of a person’s identity and not just the part we, as a society, are most comfortable with. ‘White’ feminism only benefits a very small, very privileged strata of our society. It is more palatable, more comfortable but it is not right. If we are not intersectional, we forget the most vulnerable people amongst us. They are the ones who fall through the cracks and aren’t uplifted.

Systems of oppression often work together and one replaces the other. If we truly want to leave the world better than we found it, we have to start making our activism more intersectional. It might take you a while to get comfortable with the idea of intersectionality but if you aren’t uncomfortable, you’re not growing.

11,437 thoughts on “Intersectionality and Feminism”